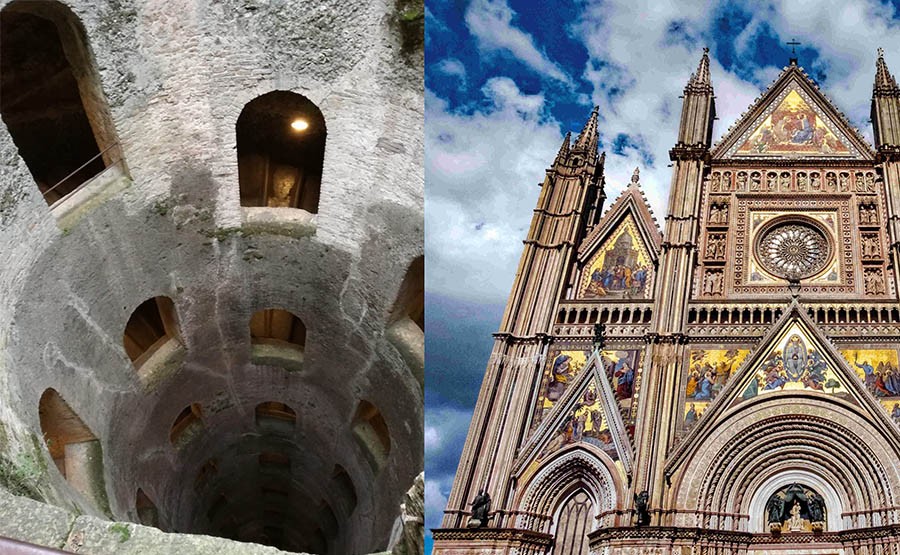 Orvieto is built on a tufa cliff between 280 and 325 meters on the level sea in the middle of “Paglia River” valley so you can enjoy an amazing view of the countryside of the area or live a unique experience visiting the Orvieto Underground, a maze of caves hidden in the silent darkness of the cliff.

Apparently Orvieto is a very ancient village because we have prehistoric evidence of inhabited settlements on top of the Tufa cliff, but we start to know the history of Orvieto since the Etruscan time 1000 years B.C. and in the first half of the III century B.C Orvieto became part of the Roman Empire.....

The peculiar geological nature of the boulder has allowed the inhabitants to dig an incredible number of cavities that extend under the modern urban fabric. Through this tortuous underground path, you can encounter panoramic openings and a never-ending set of tunnels, stairs, unexpected passages, and rooms on whose walls you can read, in small quadrangular niches, the age-old adventure of the birth of this “underground city”.

The most famous underground site of Orvieto is the “Pozzo of san Patrizio” (St. Patrick’s Well). The water well was dug in 1527 a.C and was built by “Antonio da San Gallo” to give at Orvieto a water reserve during enemy sieges. The water well is 54 meters deep and the entrance of the water well is a masterpiece of engineering. There are two helical one-way ramps, completely autonomous and served by two different doors, which allowed the extracted water to be transported with mules, without hindering oneself and without having to resort to the only way that went up to the village from the valley floor.

Another highlight of the city of Orvieto is for sure the unique “Cathedral” – also called the “Duomo of Orvieto” – he only church in Italy built in Gothic and Romanic style simultaneously.

The “Duomo” is considered a masterpiece of Gothic architecture in central Italy and it is dedicated to the “Assumption of the Virgin Mary”, the façade full of golden Mosaics and with a large rose window which is truly a marvel for your eyes. Some bas-reliefs on the piers depict stories of the Old and New Testament such as the “Book of Genesis” and episodes of the lives of Jesus and Mary” and inside two chapels are decorated with frescoes by some of the best Italian painters of the period which depict the “Judgment Day”. The most important chapel inside is the “Chapel of the Madonna of San Brizio” because of the spatial and iconographic originality and the singularity of the theme, the chapel is unique in art, painted by “Fra Angelico” and “Benozzo Gozzoli” in 1447 A.C. and completed by “Luca Signorelli” in the 1499 with the history of the “Last Days of Jesus” and a series of frescoes depicting the “Apocalypse”.

Visit “Hadrian’s Villa”, a place of imperial luxury in the Roman countryside.