Food is very important for Italians!
They love eating and sharing meals with their friends and family, while talking about soccer, which is one of their most popular subjects.

Here are some useful tips to recognize a good place where to eat when you are in Italy.

Do not fall into tourist traps! Have lunch or dinner in restaurants called TRATTORIA.

TRATTORIA is less formal than “RISTORANTI”, and less expensive as well, and it offers a special and unforgettable family show! Usually, the atmosphere is much more friendly, there are homemade dishes with local specialties, and it is usually a family business: that means that, for example, the mother or the grandmother work in the kitchen, while their children deal with the service, and they make you feel part of the family.

Choose restaurants with handwritten menu, which means that dishes are different every day, so the food is “seasonal” and made with fresh products.NO FROZEN

FORGET the places where you can find the menu outside the restaurant with pictures of the dishes, It’s a real place only for tourist! And it means that they have always the same food every day, “Frozen” for sure! 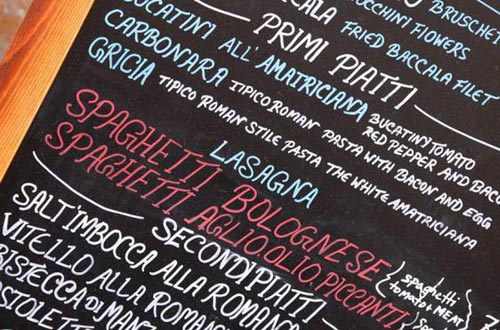 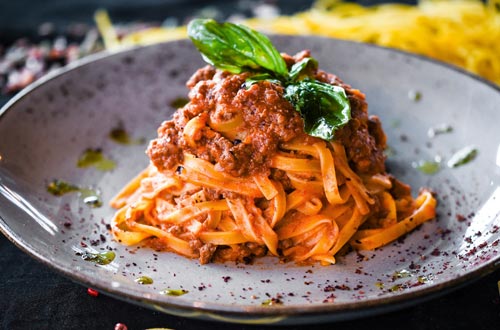 You have to respect some rules about food in Italy!

Italians believe in the concept of “food separation”, so they don’t place it “all in one plate” like a buffet

They always start with:

–Antipasto, which is basically the appetizer;

– Primo, which is your entrée, and might be “pasta or rice”;

– Secondo, which literally means second, and it’s like your main dish and might be “meat or fish” with a side of vegetables;

-in conclusion, the Dolce, the dessert.

That’s how they proceed, not the other way around! You can skip one course if you want, but you need to follow this sequence, and you cannot eat meat first and pasta later! IN ITALY IT IS FORBIDDEN.

Then some information about Bread.

Bread is not an appetizer; you cannot eat 1 kg of bread with butter or oil – at the beginning

You can have a bruschetta instead of it

We use bread to accompany the other courses, to make a “scarpetta” after your pasta!

“Scarpetta” is when at the end of your “tagliatelle alla Bolognese” (I said “tagliatelle” and “NOT SPAGHETTI alla Bolognese because “TAGLIATELLE” is the kind of pasta that you have to eating with “Bolognese sauce”), you take a slice of bread and “clean” your dish with it, and then you eat it!

“TAGLIATELLE” is a type of pasta long as “spaghetti”, but it is flat and a little bit larger than spaghetti, and for this reason the “Bolognese sauce” (that the name is “ragu’”) matches better with this kind of pasta (this is a very famous dish in BOLOGNA). https://www.romeanditaly.com/italy-food-tasting-tour-bologna/

​Bologna is the queen of food.

The real name of the food that you eat, and that you call “bologni”, in Italy is “Mortadella”.

“Mortadella” comes from Bologna, so that is why you rebaptize it “Bologni”.

“SPAGHETTI WITH MEATBALLS”?  No! They are not Italians! We eat “spaghetti” as “PRIMO”, we eat “meatballs”, but as “Secondo” and not in the same dish! This is a Disney invention from “Lady and the Tramp”!!

-PIZZA is very important for Italians-

PIZZA for Italians is a serious thing- SO Please don’t add 300 things on top, and specially “NOT FRUIT” as “pineapple.”

Coffee in Italy is only espresso, No “LATTE”

No “CAPPUCCINO” after LUNCH OR DINNER, cappuccino is only at breakfast.

No to all those strange mixes that you can find at “Starbucks” Just espresso! Espresso is drunk in 30 seconds, like a shot and might be “ristretto”, so basically shorter than an espresso, or “lungo” so like a double espresso. You can ask for a “macchiato”, which is an espresso with a little spot of milk – no more than this!

So, it doesn’t matter if you speak English because if you don’t follow these rules at the restaurant, you can be sure that the check for you will be the double, it’s a kind of punishment!

1 shares
Shopping cart
There are no products in the cart!
Continue shopping
0