The arena of the Colosseum in Rome is being renovated with modern materials, allowing visitors to walk in the arena where gladiators fought during the age of the Roman Empire! 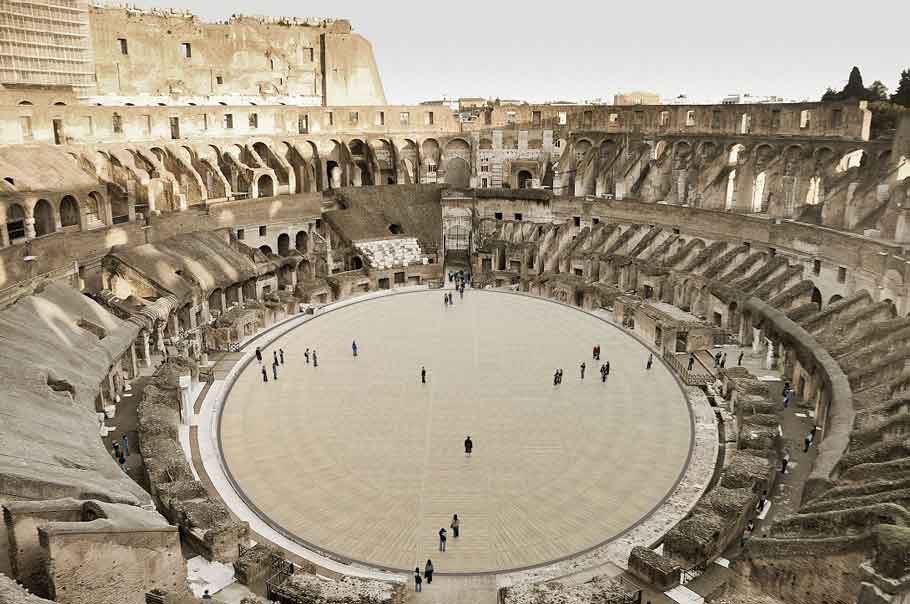 The Colosseum is considered the symbol of Rome, and this ambitious project promises to restore it to its former glory. The arena will be made with eco-friendly and light materials, and it will not damage the underground archaeological site directly underneath the Colosseum. The new arena will allow tourists to walk in the center of the monument during the day, while at night the Colosseum will be used to host cultural events and ceremonies.

The Colosseum, also known as the “Flavian Amphitheater”, is the largest amphitheater in the world, and it is visited by people from all over the world every year. It was built in the year 72 AD by Emperor Vespasian of the Flavian dynasty, and completed in 80 AD by Emperor Titus. In the Colosseum people could see fights between wild animals from all over the empire. The gladiators also fought here of course, and they were considered true celebrities at the time, the equivalent of modern-day sports champions. It was also a place for public executions. The Colosseum was equipped with movable special effects and trees, which provided a dynamic set for the different shows, and created the right atmosphere to reenact historical battles fought by the Roman Empire around the known world. The Colosseum could also be flooded to house naval battles, all thanks to clever mechanical systems hidden to the spectators.

The new arena will be built with light materials, and it will be movable, so the underground section of the Colosseum (an important archaeological site) will be illuminated and ventilated when needed. This project will achieve three things: make the Colosseum more stable and protected, make it more similar to how it originally looked, creating a more authentic atmosphere, and finally, it will make it more accessible to visitors.

There is no exact date for when the new arena will be completed, but it has been announced that the part that is currently in place will house the G20 Culture Ministerial Meeting on the 29th of July. A symbolic gesture that will show how culturally important the Colosseum is not only for the city of Rome, but for the whole country.

Do you want to visit the Colosseum? There are many tours available on our website that include the Colosseum and many other famous monuments in Rome and other Italian cities. The Colosseum and Imperial Rome tour will take you to see the most important and famous ancient monuments in Rome, including the “Colosseum”, of course, the “Roman Forum”, the “Arch of Constantine”, and the “Arch of Titus”. The Best of Italy package will take you to see the main highlights of the three most loved cities in Italy: Venice, Florence, and Rome. You can find these tours and more on our website at www.romeanditaly.com .

The Colosseum, symbol of Rome and the ancient Roman Empire, will soon be ready for you to visit it from a new perspective. Modern technologies will give you a point of view that will take you back to the time of the emperors and the gladiators.