The strangest pizzas in the world! 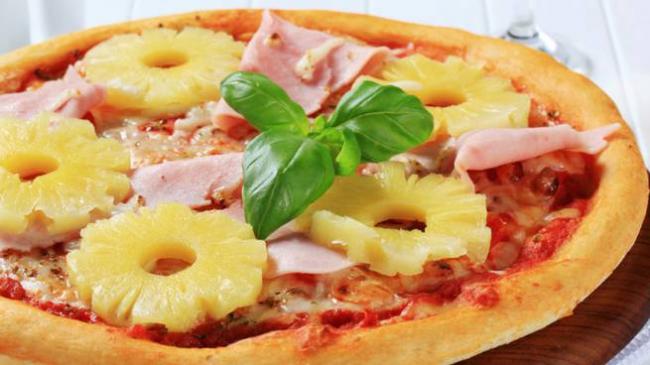 Outside the borders of our country, pizza is the food that most of all blends with local tastes and traditions, often with questionable results. We Italians care a lot about our traditional pizza, but from now on we should get used to some news …

In this period in which unfortunately we have to stay at home to recover from the Covid19 pandemic that has hit the world, we can at least eat and laugh about it … and maybe even try some new flavors!

The combination of pineapple + cooked ham (or bacon) and that subspecies of stringy cheese that is passed off as mozzarella does not find many admirers in our area, although there are those who are willing to change their minds.

Have you ever heard of this Asian fruit with a pungent flavor to say the least? It is famous for being one of the least fragrant foods in the world, so much so that it has been defined as a mix of “turpentine and onions with sock notes straight out of the gym”, and in Singapore it was banned from public transport because of its smell.

Yet, a restaurant chain has put it on pizza. And – what’s worse – like it.

4 – The pizza with Kinder eggs

A pizza with a base of caramel flan, ice cream, colored grains, chocolate sauce and Kinder type eggs (or similar chocolates) half melted.

Mr Sanchez of Chicago has seen fit to buy the packaged dough and decorate it with Christmas candy canes, which when melted look like a death of birthday candles with numbers.

If strawberry risotto exists, do they work on pizza? And what kind of cheese can they marry with? And above all, is a successful marriage? Mah.

In the United States, someone has thought of recreating the ecosystem of the Louisiana and Florida swamps with a pizza featuring alligator sausages, frog legs and python fillets. Ah, and also the “swamp cabbage”, which is nothing more than a palm heart.

A Finnish pizzeria presented a smoked reindeer pizza at the New York Pizza Show, beating the creations of two Neapolitan chefs and winning the first prize. The pizza was called The Berlusconi, and it’s great.

We are still in the States, which have made pasta with cheese a form of art in the overflowing Mac ‘N’ Cheese, the macaroni and cheese that are popular everywhere in America. So why not combine two legacies of the Bel Paese into a triumph of carbohydrates? Here is the pizza with macaroni and cheese on top, au gratin to the right point.

The poutine is a rich and very tasty dish that marries french fries with cheese and gravy whose existence we have to thank someone in Québec. Pizza Hut one day decided to follow the same philosophy of mac n ‘cheese pizza and combine the two.

For $ 500, also in New York, you could try this pizza with lobster, Osetra caviar, truffle, avocado, mango and edible platinum leaves, plus three shots of tequila. Where is it? At the Bodega Negra restaurant.

14 – The pizza with chicken curry

This is actually a great classic, so much so that there are various variations according to tastes and regions: the pizza with chicken curry in fact can be spiced in the Thai way, or become a hybrid that contains the world.

Straight from Missouri, pizza with grasshoppers is already difficult to watch for those who are not a lover of Far Eastern candied insects. Those who have had the courage to taste it say that they have a taste similar to asparagus, a chewy texture, while the older ones are more crunchy and with a nutty taste, like peanuts or almonds. We trust.