The most romantic walks in Italy

February has arrived, and we have suggestions for Valentine’s addicted! 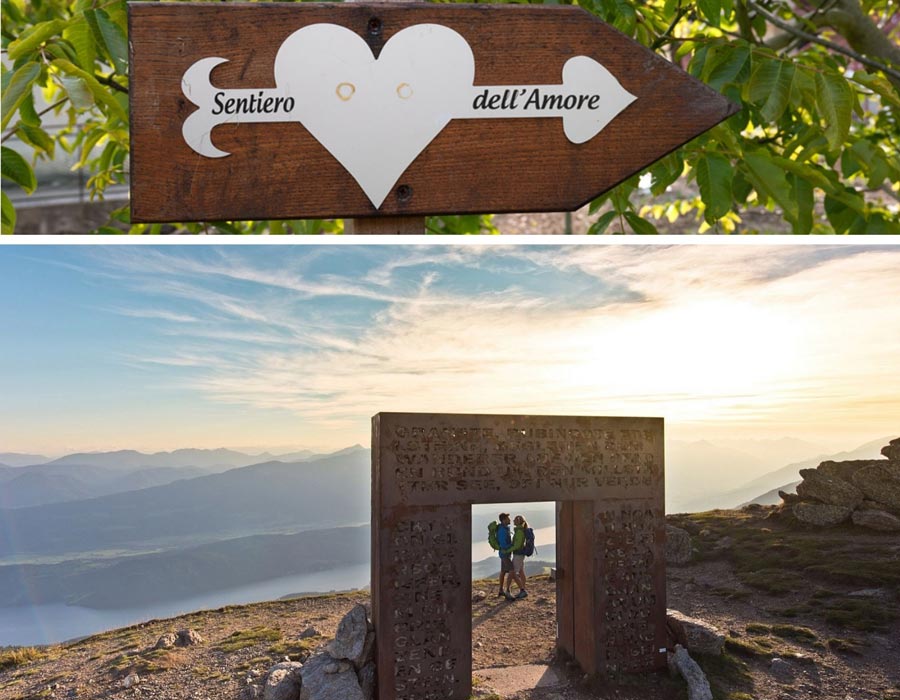 In Città della Pieve there is an alley where, in order to pass through it, one must necessarily kiss. It is called Vicolo Baciadonne, and the name perhaps already says it all. It is said to be the narrowest alley in Europe (it is between 19 and 27 inches wide). Certainly, a place for incurable romantics, also given the panorama that can be seen at the end of the alley. Barely one person at a time passes through the street, unless you walk by hugging or hugging in a passionate kiss. From here you continue by going around the walls, completing a walk with a high rate of romanticism.

Love is a riot of phrases, flowers and fluttering hearts in Naples, in the Vicolo dell’Amore in the Spanish Quarters. Vico Santa Maria delle Grazie, this is the real name of the street that is full of shops and bunches of roses.  Just raise your eyes to the sky and, under the clothes hanging, you will find the phrase to hit your beloved. A record place for sharing on social media, the Vicolo dell’Amore is the Neapolitan set preferred by directors and stylists,  and certainly a romantic selfie par excellence.

On the Brenta Dolomites there is a paradise at 1,430 meters above sea level. It is the Sentiero dell’Amore in Fai della Paganella, an exciting and simple panoramic route that from the Meriz Refuge (you can arrive with the Santel – Meriz chairlift) leads to a natural balcony overlooking the Adige valley. The path is dotted with wood carvings and love poems.

Kiss in the Vico  (Foggia – Apulia)

In Vico del Gargano, in the province of Foggia, San Valentino is the patron saint. What better occasion than the couple of lovers to visit the village located  in the Gargano National Park. Moreover, here every year, on February 14th, hundreds of couples meet in the Vicolo del Bacio, to share a romantic moment and leave a note in the “Pozzo delle Promesse”.

Between Monterosso e Vernazza, the Sentiero Azzurro climbs between vineyards and hills, with incredible views of the blue. If its most famous stretch, the “Via dell’Amore”, which connects Riomaggiore to Manarola, is closed for works until April 2024, you can always walk along the Vernazza to Monterosso section (2,48 miles), no less suggestive, filling up the eyes of wonder. After visiting the village of Vernazza, go up a narrow alley between the houses. After crossing the bridge over the Fosso Vignaresca, you quickly climb up through the vineyards.

Between ups and downs, you cross Costa Mesorano and the Crovarla Valley. Then, the path forks: one section reaches Monterosso in Piazza Garibaldi, passing the town hall behind it, another follows the coast up to the seaside promenade.

The streets of love in Pienza (Tuscany)

Pienza, in Tuscany, is the city of lovers. Here, walking hand in hand in search of the romantic glimpse is practically a must: in the enchanting historic center the Via del Bacio, the Via dell’Amore, the Via della Fortuna and Via del Buia invited to walk hand in hand. Of the four cobbled streets, Via del Bacio is certainly the most characteristic, also for the belvedere from which you can appreciate the whole Val d’Orcia. The Streets of Love, so picturesque, the town, full of picturesque views, with the Cathedral, Palazzo Piccolomini with the Loggia and the suspended garden, are the perfect destination for a Valentine’s weekend.

Nervi, on the easternmost coast of Genoa, overlooks a cliff along which the Anita Garibaldi Walk runs. It starts from the beautiful marina and continues with views of the blue for more than one mile. The views of the sea, the small bays and the Groppallo Tower, once called the Hay Tower because the wet brushwood was burned to send smoke signals to the sailors and fishermen out at sea, make it one of the favorite walks for lovers.

Walk of lovers in Gradara (Pesaro)

Gradara, one of the most beautiful villages in Italy,  that has contributed, among other places, to making the Marche one of the 30 must-see destinations, is undoubtedly a romantic destination. Legend has it that its fortress was the backdrop to the tragic love story of Paolo and Francesca, also told in the Divine Comedy. But there is no torment in walking the Lovers’ Walk, close to the walls, which can be reached by descending the stairway of love. The track is 2 miles long, very easy to travel, winds through the streets of the village until it reaches the surrounding fields.

The Belvedere of Love in Monferrato (Piedmont)

A ring route, of 6,21 miles, lasting three and a half hours, among the Unesco Heritage hills. In Coniolo, a small village about 4,34 miles from Casale Monferrato, couples can walk side by side  in a romantic walk that crosses the fascinating Monferrato landscapes and reaches the Belvedere dell’Amore. On the top of this hill, next to the church, there is a very particular glass cabinet: inside there are cut roses, which lovers can give themselves as gifts. On one condition, as the writing warns: “Open only in case of true love”.

Nice and last district of Syracuse, the island is really on a human scale. A romantic walk till the Fonte Aretusa, a small corner of fresh water from which papyrus plants spontaneously sprout, it is almost a must to honor the protagonists of this romantic love story. Very briefly, the legend tells of Alfeo falling in love with the nymph Arethusa. The nymph, not reciprocating the young man’s feelings, asked for help from Artemis, who transformed Arethusa into a source. But Alfeo not wanting to abandon his beloved was transformed into a river by the gods. The same river that still joins the Arethusa source today.