Stanley Tucci’s Searching for Italy is coming back for a second season!

Searching for Italy, Stanley Tucci’s wildly popular show is coming back for a second season to explore even more traditional Italian dishes. 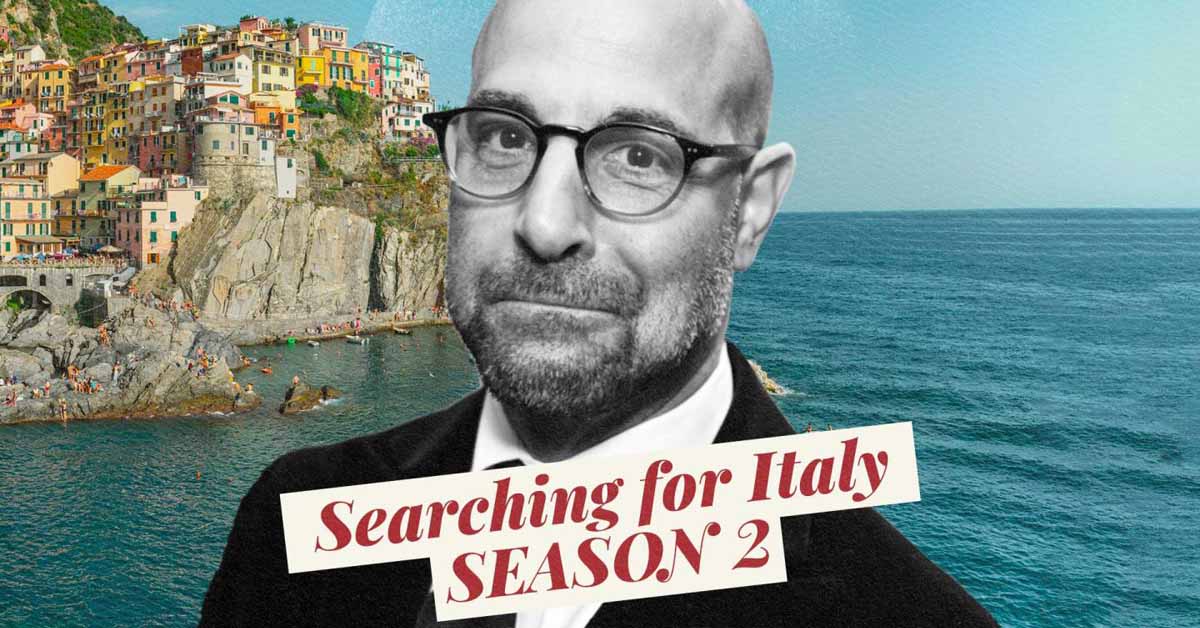 Searching for Italy, Stanley Tucci’s wildly popular show is coming back for a second season to explore even more traditional italian dishes. All fans of the show have one burning question: where will he go next, and what delicious food will he feature in this much anticipated new season?

In the first season of the show Tucci visited some of the main italian cities: Milan, Rome, Florence, Naples, Bologna… but Italy has an extraordinarily diverse culinary culture, so he certainly hasn’t run out of places to visit yet!

In the north of Italy, under the shadow of the Alps, lies Trentino Alto Adige, an area known for the many typical dishes, many of which are influenced by the traditions of Austria and Switzerland, with which it shares a border. If Stanley Tucci decided to visit it for the second season of Searching for Italy, he should be sure not to miss out on a slice of torta di grano saraceno, a hearty dessert usually filled with raspberry or red currant jam. Another traditional dish of this area is canederli, bread dumplings that come in many different varieties, as every chef will develop their own unique way of preparing them.

The Langhe area in Piedmont, especially the city of Alba, is renowned for its rare and delicious truffles, which are found among the roots of the trees that grow in the area. This delicacy is best paired with a good wine, preferably a Barolo or Barbesco, and we are sure that Stanley Tucci would love to have a taste of it!

He could head over to the beautiful island of Sardinia, with its unique culture and beautiful beaches. Here Tucci would be able to taste lamb with artichokes, an Easter dish in which lamb is roasted slowly along with white wine, parsley, and other herbs, making it tender and richly flavorful. He could also try some carasau bread, a traditional dish with a long history. It is a type of flat bread with unique characteristics that make it absorb flavor perfectly, and it is suited for both sweet and savory toppings.

One of the big Italian cities Tucci missed on his first visit is Venice, and there’s a lot of delicious food hidden among its canals. A typical treat that would pair perfectly with an Aperitivo on the lagoon is “baccalà mantecato”, a mousse made from cod that has been cooked in milk, usually served on focaccia bread, toast, or the typical northern dish polenta. For a sweeter food, Tucci could try “fritole”, small fried balls of dough covered in sugar. Fritole are traditionally eaten during the carnival, which is another important tradition of the city. The Carnival of Venice is famous all over the world for its one-of-a-kind beautiful and intricate masks.

The south of Italy is home to some of the most delicious traditional dishes, and Apulia, or Puglia in Italian, is an area rich with flavors and history that would certainly be a great choice for Searching for Italy’s second season! Among the best traditional Apulian dishes, we recommend the tiella barese, typical of the Apulian city of Bari, in which many different ingredients seamlessly blend to create a delectable treat. Into a traditional “taieddha”, a pan made of terracotta, go rice, potatoes, mussels, tomatoes, onion, garlic, parsley, and breadcrumbs. This dish would make anyone’s mouth water! If Tucci is feeling like going for a sweet treat, we suggest he tries the typical dessert of Lecce: the pasticciotto: A short pastry filled with a sweet custard. Simple and delicious!

Where do you think Tucci will go for the second season of the show? And what are your favorite Italian dishes? Let us know in the comments!