An ancient Hypogeum founded in the area of Rome called “pigneto”, this area famous for nightlife and street art, a place full of art and culture by its squares, views and local taverns:
in fact, the owners of the historical Necci bar found out by chance the underground ancient site 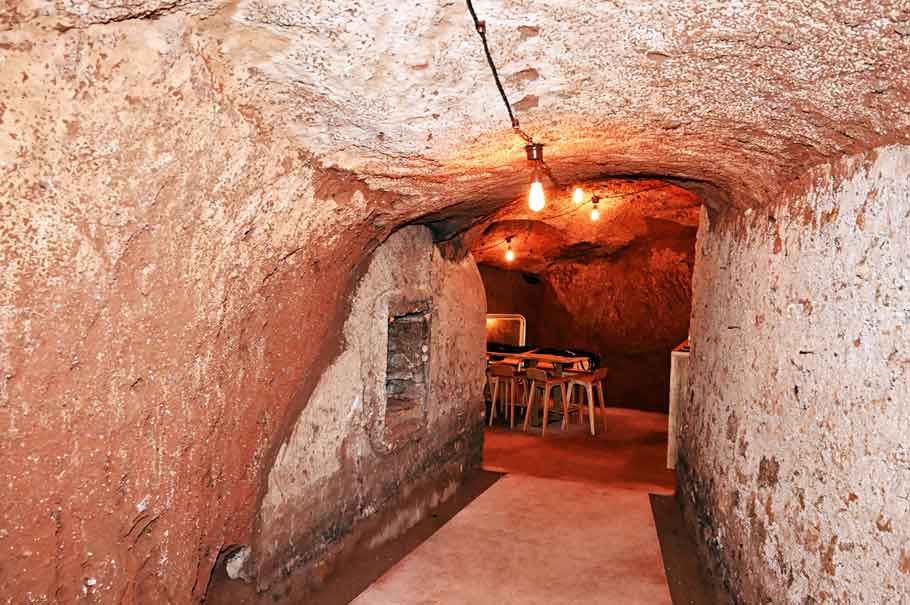 Many residents of the place confirm that they have always heard about some underground passages used during the Second World War, but they used to think that they were legends, until now.

During the pandemic, the owners of the bar were trying to take care of their garden, but they couldn’t understand why a plant next to to enter of the bar didn’t grow up. Then, the discovery: 10 meters under the plant, there was an Etruscan-Roman underground cave, virtually intact.

After nine months of work, the cave comes back to light. Very few things were retouched, with 2000 years old vaults of pozzolana, archaeological remains and a narrow angle for vernissage, tasting and special events.

Born in Etruscan-Roman age, at the beginning of the nineteenth century, the hypogeum became the winery of the above farm. In the same streets where nowadays teenagers stop for an apéritif, years ago there were the carriages of the Agro Romano, and then they stopped at a few meters of distance by the place where today the bar is located. Actually, in the cave, there still are some laces used to drop the barrels into it.

The aim of the cave changes during the Second World War, when it became an anti air refuge for the residents, trying to avoid the bombings which destroyed some near neighborhoods, from Centocelle to Torpignattara. The only one building that did not collapse was Enrico Necci’s farm, which then turned into a dairy, ice-cream parlor, until the well-known bar at Pigneto.

After the Unification of Italy, these underground passages were used by homeless people, until they were definitively closed in the 80s. The neighbors thought that some people used to go in these caves to assume drugs, and others were convinced that children got missed there.

Thanks to the owners of the Necci bar, the cave has a new life: the place will have a limitate fruition, and it will be possible to visit only by a reservation, due to the narrow spaces inside the cave and to take care of its fragility and antiquity.

The discovery of this cave will be narrated by a docufilm “Ericovero: deep history of Pigneto neighborhood”, written by the same manager Massimo Innocenti, in advance on the 25th of September, during the 4th edition of the Pigneto Movie Festival. A tribute to the historical memory of Pigneto and all its residents, to all those people who succeeded in going out of the refuge and had the opportunity to tell us their experience.

This is a beautiful and deep experience to live: enjoy the cave and its amazing views, its history and let yourself be captured in a past dimension. What are you waiting for? The hypogeum of Pigneto is waiting for you!