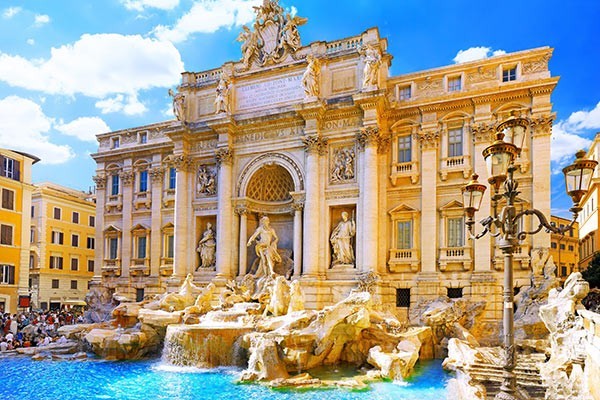 Visit our Accessible Site.
Half Day
Trevi Fountain - Navona Square - Pantheon - Spanish Steps
All our tours are PRIVATE, not sharing with other guests.
Rome.

Our Walking Tour Rome has been designed to cover some of the most interesting sites of Rome.

At first we visit the Trevi Fountain. This baroque fountain designed in 1762 by Nicola Salvi became famous in Federico Fellini movie “La Dolce Vita“. The fountain is also known for the legend of the three coins: if you throw three coins and get three wishes to come back in the Eternal City will be in your destiny!

We carry on to Piazza Navona. This square originally was a Roman stadium and still retains its oval race-track shape. In Renaissance  times started the building of the actual square with spectacular fountains and churches, and more recently has been created art galleries, outdoor restaurants and cafés. So this piazza has become the animated centre of Rome’s day and night life. A square really full of life and art. A place to admire and for unwind.

Then our Walking Tour continue and we make our way through the alleys until we arrive to the Pantheon, one of the greatest and best preserved monuments of ancient Rome. Built by Agrippa in 27 B. C, the monument is a great example of architecture. Originally a Pagan Temple, it was turned into a Church in 609 by Pope Bonifacius IV.

Our walking tour through Rome carry us to Piazza Colonna where we admire the marble column built by the Roman Senate in memory of the Emperor Marcus Aurelius. From here we arrive to the Spanish Steps, a big flight of steps dominant on Spain Square. This shape is shaped like a hourglass and is one of the most popular spots in the city, built in 1726 by Francesco De Sanctis. From the top of the stairs the view of the Eternal City is really “wow” and unforgettable! We end the tour going to do shopping in the streets surrounding Piazza di Spagna, famous for to be full of the best shops in Rome.