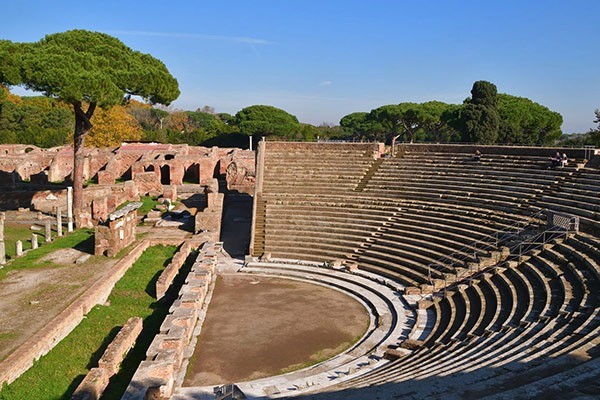 Half Day
Ancient Ostia
Closed on Mondays and national holiday days. All our tours are PRIVATE, not sharing with other guests.
Rome.

Surrounded by the Mediterranean pine forest, rich in ruins unique in the world, Ostia was founded in the fourth century BC and it soon became a very important place of business. It was one of the main port of the Roman Empire. The ruins of the city will give us a perfect idea on how the Ancient Romans lived, the hot springs of Neptune with its famous mosaics, the Theater, the Forum, the House of Diana and the ancient Roman tavern, the “Termopolium”. Along the main street you can look at the remains of ancient storefronts, the only two surviving examples of public toilets in the world as well as extraordinary examples of the Ancient Roman apartment blocks, the “insulae”, dating back to the fourth century B.C.

The tour will end with the visit of the medieval town and its castle, through narrow and picturesque alleyways where time seems to stand still.