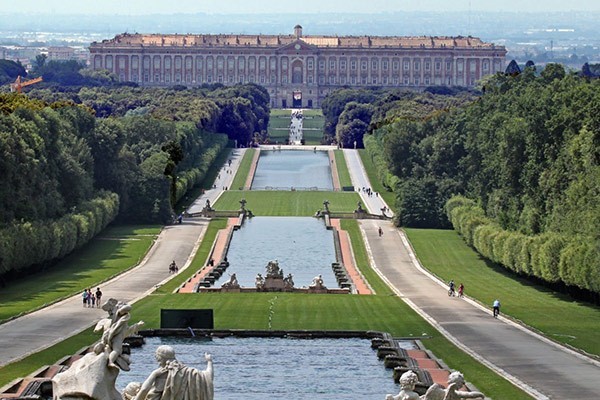 Visit our Accessible Site.
Full Day
Royal Palace of Caserta
All our tours are PRIVATE, not sharing with other guests.
Naples.

The Royal palace, a symbol of patronage and splendor of the monarchy that survived revolutions, bombings and neglect, is the most tangible element of the grandness that the dynasties desired and in which they lived.

Following the death of Emperor Charles VI, a new war had begun and the capital found itself under pressure from the British fleet to obtain the neutrality of the Kingdom of the Two Sicilies.

Within the king grew stronger the need to build a new capital far from the sea, but not too far from Naples. The building, besides housing the royal family, could contain a university, several departments, a public library, the judiciary, a large theater, a seminar and a cathedral church.

Certainly, for “his” palace, the king’s thoughts ran to Versailles where he had spent wonderful moments guest of the French court. Charles conferred the task to Vanvitelli, also architect of St. Peter. The Royal Palace, or Palace of Caserta, is a historic house belonged to the royal dynasty of the Bourbons of Naples, declared World Heritage by UNESCO and surrounded by a vast park in which he identified two areas: the Italian garden and the English garden.

Called the last great achievement of the Italian Baroque it stretches three kilometers in length, the tour includes the visit of the royal apartments and the gardens.