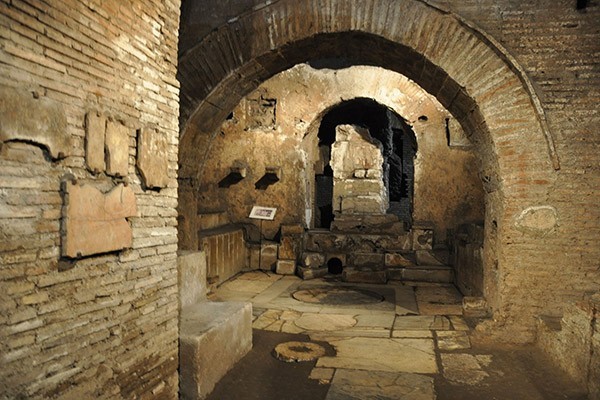 Half Day
Mithraeum of Circus Maximus
All our tours are PRIVATE, not sharing with other guests. EXCLUSIVE OPENING!
Rome,Underground.

The Mithraeum was discovered in the’30s of the last century, during the works on the creation of the deposit for the scenes of the National Theatre of the Opera.

They discovered a large structure of the second century, in good state of conservation and with a special and accurate decoration in marble, several times changed and turned into a Mithraeum during the third century, a place used in the rituals of the mystery god Mithra, whose faith religious actually found most propagation in the Roman Empire. Main chapter of the myth was the killing of the cosmic bull who, dying, gives life to the universe.

The current entrance had to be at that time the secondary one, while the main one was in correspondence of Circus Maximus. The first room on the right was intended to be an apparitorium, a sort of sacristy, while the second room appears to be a typical element of the Mithraeum: the pulpit, made of masonry, where the initiates sat during the functions and the ceremony of the sacred banquet. This sort of counter reappears in the last and most important compartment, the sacred place itself, the spelaeum, the cave in which the meeting with the god happened, through various degrees of purification. Inside an arch, on the back wall, there is a semicircular kiosk that must have contained a small statue of Mithras. The representation of the myth was usually carved into a great embossing that in this Mithraeum was found out of place and located in the center of the sanctuary. At the top of the embossing there is a carved inscription of his benefactor: “To the Sol Invictus god Mithra, Hermes Tiberius Claudius following a vote offers the image of God”.