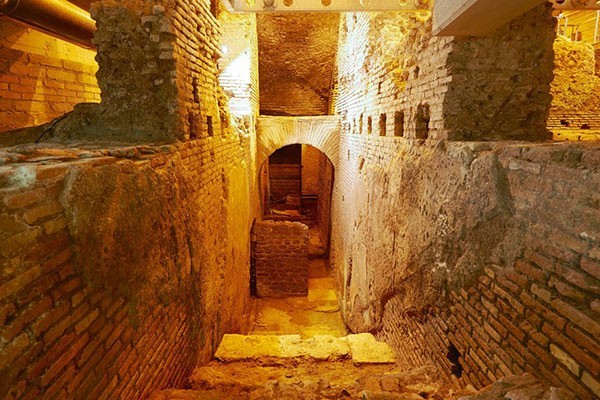 Half Day
Insula of Vicus Caprarius
All our tours are PRIVATE, not sharing with other guests. EXCLUSIVE OPENING!
Rome,Underground.

The term “City of water” used to define the archaeological area of the Vicus Caprarius is due to the presence of the element that characterizes the site: the water that springs from the Fontana di Trevi. The monumental baroque fountain fueled by the Virgin Aqueduct is located near the archaeological area and not too far from the famous Trevi fountain.

The excavations have highlighted two buildings, contiguous and contemporary. Aligned on the west side, along the Vicus Caprarius or Capralicus. The name derives probably from the presence of an aedicula Capraria, an area of worship linked to Iuno Caprotina.
The North building can be identified as a housing complex. The South building, also well preserved and on higher grounds, it is likely that was used for public uses.
The first constructive phase seems to be able to attribute to the Neronian age: this dating would make the structure one of the oldest houses known in Rome.

The archaeological area is currently accessible in all its parts, thanks to an elevated path ; a museum space has also been set up, in which the finds are exhibited.