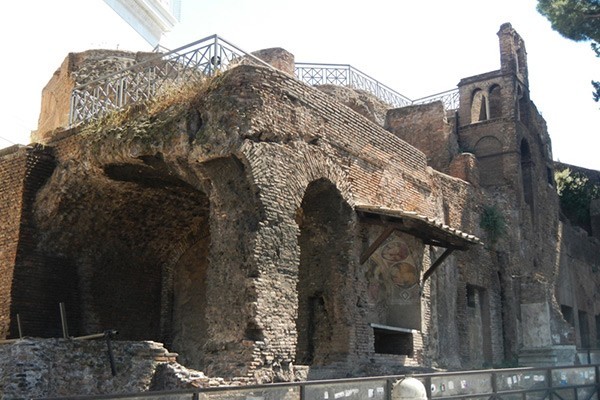 Half Day
Insula of the Ara Coeli
All our tours are PRIVATE, not sharing with other guests. EXCLUSIVE OPENING!
Rome,Underground.

The Insula of the Ara Coeli is a building that dates back to the second century AD, it’s one of the several buildings discovered at the foot of the Capitoline hill and was brought to light during the work in 1926 for the isolation of the Capitol. The Roman insula, so called because of the peculiarities of its structure, can be considered a typical example of the urban planning of the imperial Rome. The building was made in bricks and the back wall, which rests directly on the steep cliff of Arce Capitolina is reticulated and can be dated back to the first century AD.

The building is characterized by environments of irregular shape, consisting of at least five floors, still preserved. Starting from the ground floor,  small premises, the tabernae, are visible, and originally had wooden floors, overlooking a sheltered courtyard with a portico with pillars. It is thought that these were used as shops and warehouses and communicated through stone steps and wooden stairs directly with the above environments, environments that constituted the mezzanine. This, designed for the houses of the owners of the shops below, is characterized by black and white mosaic floors and arched windows.

A balcony on shelves of travertine marks the transition to the rented apartments, connected by an internal staircase from the medieval period. Consisting of a large number of rooms, lit by rectangular windows, the rooms become more and more uncomfortable as we go up to the upper floors. It is estimated that the building could host at that time about 380 tenants.