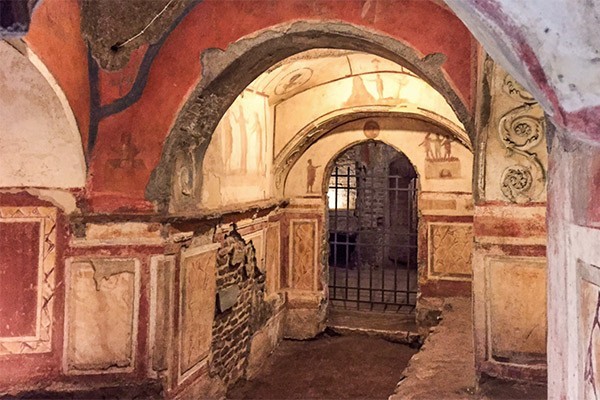 Half Day
Catacombs of Priscilla
Closed on Monday. All our tours are PRIVATE, not sharing with other guests.
Rome,Underground.

The Catacombs of Priscilla on the Via Salaria in Rome, are situated in a quarry that during Roman time was used for burials.

Some of the walls and ceilings display fine decorations illustrating Biblical scenes. The Catacombs of Priscilla contain many wall paintings representing saints and early Christian symbols. There is also the “Greek Chapel”, a square chamber with an arch which contains 3rd century frescoes interpreting Old and New Testamens scenes. Above the apse, there is a representation of the Last Judgment. Near this figure, the Madonna and the Child and the Prophet Isaiah are represented.

Originally in the Catacombs there was a series of underground burial chambers; the most important of these are the “arenarium” or sand-quarry, also the cryptoporticus, (an underground area to get away from the summer heat), and the hypogeum with the tombs of the Acilius Glabrio family. The noblewoman Priscilla, a member of this family, granted the Church to use the property. The Catacombs took its name from Priscilla and her commemoration since she is considered as a benefactor of the Christian community in Rome.