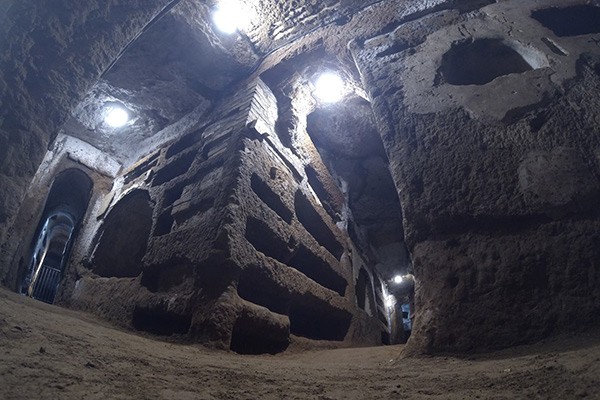 Half Day
Catacomb of Saints Peter and Marcellinus
All our tours are PRIVATE, not sharing with other guests.
Rome,Underground.

A Roman patron, Lucilla, brought the bodies of the two martyrs on Via Casilina, near the area of “Duas Lauros”, in the existing Christian cemetery that was so dedicated to their memory and that became a site of pilgrimage for many believers.

Currently the relics are in Seligenstadt, Germany. The great devotion of the worshippers is documented by numerous graffiti that can be seen in the little apse and in the tunnels leading to the tombs of the martyrs; there are invocations in Latin, but also in Runic, reflecting the fact that is was also place of worship also for Celts and Germans.
Tha access to the catacombs is from the courtyard of the basilica. The tomb of the two saints initially were two simple burial niches, then enriched by monumental marble decorations by Pope Damasus. These catacombs, decorated with biblical scenes, are among the largest of those present in Rome.