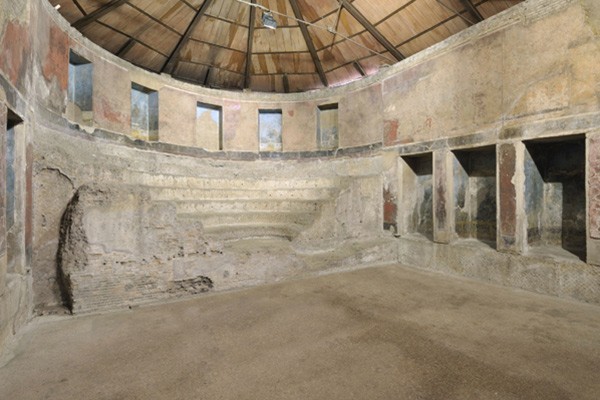 Half Day
Auditorium of Mecenate
All our tours are PRIVATE, not sharing with other guests. EXCLUSIVE OPENING!
Rome,Underground.

The Auditorium of Mecenate is located in the park of Largo Leopardi (along via Merulana) and currently well maintained as a whole; its discovery was made in 1874, during the excavation work for the construction the Esquilino area.

The building, now protected by a roofing, originally had a vaulted roof, and consists of a large hall 24 meters long and 13 wide, with a semicircular apse on the bottom which has a staircase with seven concentric steps.

The peculiarity of the building, however, is the pictorial decoration, realized at the beginning of the first century AD, which is well maintained both in the niches and on the top, where there is all along an ornament on a black background with Dionysian scenes and miniature gardens. The steps that distinguish the back wall are too small to let us think it’s a theater (idea that, at the time of the discovery, gave name to the place), in fact it is nothing but than a monumental fountain.

This room, richly adorned and enlivened by water games which increased the already cool environment of the basement, was probably used as a “summer triclinium”, that is a place of convivial meetings and cultural events. The verses of an epigram by the poet Callimachus, found painted on the plaster outside of the apse, represent an additional proof of the usage of the hall as a circle of intellectuals.