The real history of the Italian Carbonara was born!​

Did you know that the so popular Roman dish the “Carbonara” was born in 1944 thanks to the American soldiers?
The history will leave you wordless! 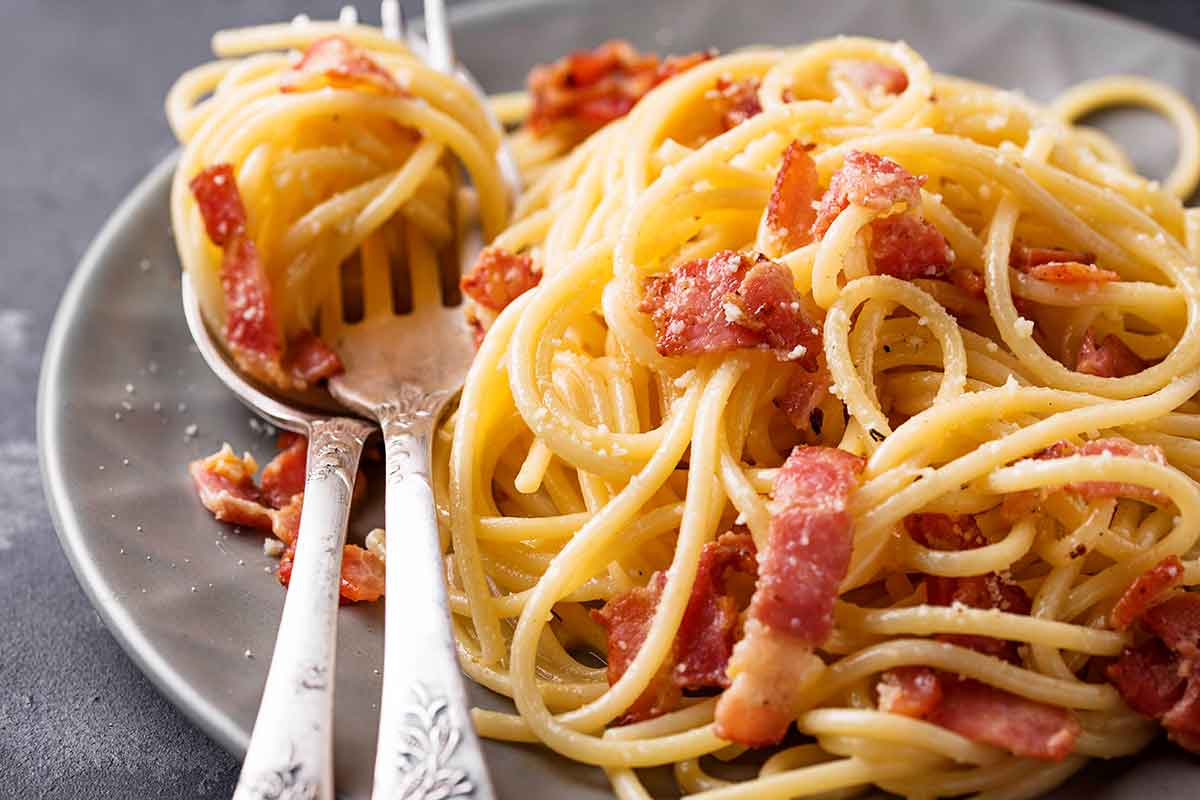 There are a lot of stories about the origins of the most popular Roman dishes, the” Carbonara”, but here we will tell you about the real one, that started in 1944 during the Second World War. The American soldiers that at the time were in Italy, used to eat typical Italian dishes, in particular the pizza in Naples and other simple dishes made by poor ingredients like eggs, pepper and bacon. In fact, they used to eat dishes prepared very quickly on the street at the moment (what we know today as street food), like for example the spaghetti with cheese (cacio) and pepper.

It is believed that one day, eating the dishes prepared on the street, the American Soldiers tasted the so called “cacio e ova” (spaghetti with eggs and cheese) in Naples, that was prepared by Roman chefs. One day, Americans decided to add their typical bacon to the plate, to render it tastier. From that simple receipt, Italians worked on this plate to make it better, and Romans decided to replace bacon with the “guanciale”, a typical Italian cured meat of the Roman area prepared with pork jowl or cheeks. By this way, mixing all the ingredients like spaghetti, eggs, guanciale and pepper, was born the so popular “Carbonara”, that takes the name from the name of the Roman chefs that cooked the plate to the American soldiers, that were called “carbonari”. Anyway, the “Carbonara” became a real myth of the Italian cuisine.

There are also legends linked to the origins of this so loved Italian dish, as for example the history of an American soldier, that added to this simple dish of spaghetti the so called “K ration”, made with eggs powder, bacon and single cream. It is a receipt that makes the skin of goose, but that could be the ancestor of our beloved “Carbonara”.

Nowadays, you can taste excellent “Carbonara”in every typical Roman restaurant, but there are somewhere you can also know about the Roman history and learn something about the spread of this popular Italian dish all over the world. There is, for example, the renowned Roman restaurant “Il Vero Alfredo”, in Augusto Imperatore square, that was founded by a popular Roman chef named Alfredo, that became famous thanks to its plate “the Fettuccine”, made with egg pasta and butter. Then, the restaurant started to serve also other local dishes of Rome as the “Carbonara”, in fact, his “Carbonara” is considered as the best of the Italian capital. Of course, there are a lot of different places where you can eat a real good dish of spaghetti, for example the area of Trastevere is full of osterie, and you will be spoilt for choice!

After reading the real history of the Carbonara, maybe you should taste a real one in one of the best Roman restaurants. So, what are you waiting for? Visit our website and contact us to plan you perfect trip here in Rome!