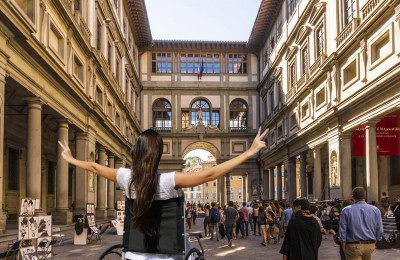 Uffizi is one of the greatest museums in the world, thanks to its extraordinary collections of paintings and ancient statues from the 14th century. It hosts some of the most incredible Renaissance art masterpieces of all time.

Some of the works collected in the Uffizi Gallery were made by extremely well-known artists, such as Giotto, Simone Martini, Piero della Francesca, Fra Angelico, Filippo Lippi, Botticelli, Mantegna, Correggio, Leonardo, Raffaello, Michelangelo and Caravaggio. The collections by German, Dutch and Flemish artists are also important. Those include Dürer, Rembrandt and Rubens.

The Gallery is located on the top floor of a large building, fabricated between 1560 and 1580. It was designed by Giorgio Vasari as headquarters for the administrative offices of the Tuscan State, and built at the behest of Grand Duke Francesco I. Then it was enriched, thanks to the contributions of Medici family members, passionate collectors of paintings, sculptures and art objects.

It was reorganized and expanded under the Lorraine dynasty, succeeding the Medici and, later, by the Italian State.

Some other important collections inside the Uffizi Gallery are: the Contini Bonacossi Collection and the Prints and Drawings.

In the Uffizi Gallery, you can also find the Vasari Corridor: a suspended corridor made by Vasari in 1565, which connects the Uffizi building, Palazzo Vecchio and Palazzo Pitti. Here, there are very important collections of 17th Century paintings, and a collection of Self Portraits.

This accessible tour moves on to the Cathedral and its bell tower designed by Giotto. You will then admire the famous Baptistery and reach Ponte Vecchio, which is jewelry craftsmen and goldsmiths’ shops. Later on, you will proceed to discover the history of Palazzo Vecchio, the seat of political power, and Piazza Signoria, the center of social life, built on top of the ruins of some houses of the 13th century.

On request, with an extra cost, it is possible to have an accessible transfer with vehicle equipped with lift.