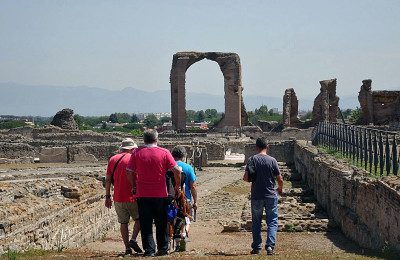 Half Day
Please note: for this kind of tour tour the wheelchair user have to rent our special wheelchair for inaccessible sites: “Wheely trekky”. The site is not accessible with manual or electric wheelchair or mobility scooter. Note: Closed on Monday and national holidays.
Rome.

The Life of Emperor Commodo, known as the “Gladiator Emperor” and his Villa dei Quintilii Accessible Tour Rome.

In 182, after having sentenced the Quintili brothers of death for conspiracy, Emperor Commodus (“the Gladiator Emperor”) confiscated the villa. He then proceeded to embellish it with constructions, expanding it until it became the largest and richest house in the suburbs. After that, he started fighting in the arena: Commodus was in fact the only Roman emperor to combat in the Colosseum.

Inside the villa, the area known as the “Maritime Theatre”, proved to be an arena used for training, fighting and for the Emperor’s performances in front of a selected audience. And the master of the gladiators, Narcissus, was the Emperor’s personal trainer. He murdered Commodus in 192 in a bathroom that is still visible today along with other huge rooms. They still have intact walls and a breathtaking view, a green landscape with streams, slopes and plenty of water carried up by the two ancient aqueducts: Claudius and Anio Novus.