Accessible Tour of the Roman Castles 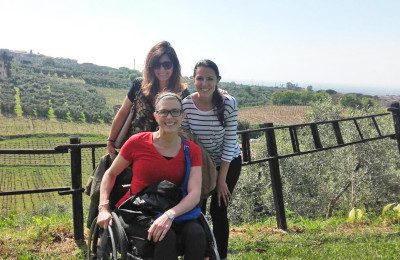 The area of the Roman Castles is located in the Roman countryside on the Alban Hills and includes: Castel Gandolfo

roman domus” of the republican and the imperial age, such as the Domitian’s Villa, which is the biggest one. Furthermore, it is possible to visit the religious building of the “Collegiata pontificia di San Tommaso da Villanova” built by the famous artist Gian Lorenzo Bernini.

The Lake Nemi is located between the cities of Nemi and Genzano, in the South of Rome.

In the past, the lake was a place for fun and vacation of ancient romans. The name “Nemi” comes from Latin “Nemus” or “Holy wood” and it is referred to the near wood, which is dedicated to the goddess Diana”, in fact, Lake Nemi is also called “Diana’s mirror”. In the area of the lake there is also a temple dedicated it.

Nemi is the smallest city of Roman Castles’ area. It is located in the centre of the Alban Hills and its historical city centre rises in a strategic position that allows admiring a breath-taking view of the lake. Moreover, the city is famous for the cultivation of strawberries and It is also known because in 1927-1932, two roman boats of the emperor Caligula, were recovered from the Lake Nemi and are now conserved in the “Museo delle Navi Romane” (Roman Ships Museum).

Ariccia is one of the most famous cities in the area of the Roman Castles. It is well-known thanks to the historical and architectural works of the artist Bernini and the religious importance of the “Sanctuary of Santa Maria di Galloro”.

Typical of this area are the “fraschette”, a particular kind of tavern, in where it is possible to taste the “porchetta” (a kind of pork meat), which is the gastronomic symbol of the city.