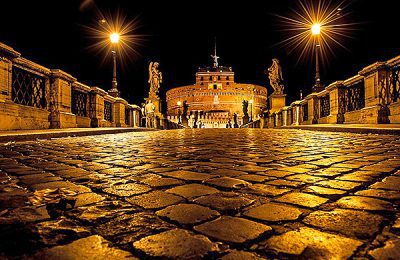 Half day
Note: this accessible tour is not available on Sundays and during religious.
Rome.

You will start the accessible tour from “Piazza del Popolo”. There, you will visit the church of Santa Maria del Popolo, where the body of the first dead cardinal with an ambigram tattooed on his chest was found. Then you will reach the Pantheon, one of the oldest and best preserved monuments of the city. There, Michelangelo, studying the spherical dome, thought that, according to its structures, it was “built by a hand of an angel and not by human hand”.

Moreover, it is the site where by mistake was defined by the protagonists of the novel, the first Clue, the Tomb of Raphael.

Later, you will continue the tour towards the famous Piazza Navona, and you will admire the magnificent fountain of the four rivers, made by one of the master of the Roman Baroque, Gian Lorenzo Bernini. The penultimate stage of our accessible tour, is the church of Santa Maria della Vittoria, where the third cardinal is found dead and where you can admire the statue called “The Ecstasy of Santa Teresa” made by Gian Lorenzo Bernini.

You will conclude your itinerary at Piazza San Pietro, where you will visit of the square and the interior of the homonymous Basilica, until the entrance of a Castel Sant’Angelo, which is the final destination of the novel, “The Sanctuary of the Illuminati”.