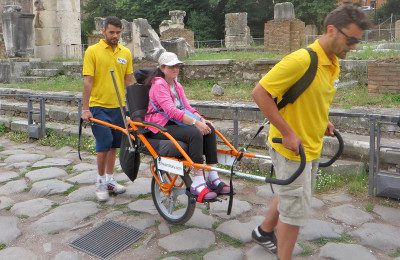 Half Day
Please note for this tour the wheelchair user have to rent our special wheelchair for inaccessible sites Wheely trekky. The site is not accessible with manual or electric wheelchair or mobility scooter. Closed on Mondays and national holiday days. Private guide available for the duration of the tour to make it unique and unforgettable.
Rome.

Ostia is surrounded by the Mediterranean pine forest and unique ruins. Ostia was founded in the fourth century BC, and it soon became one of the biggest business centers. In addition, it was one of the main harbors in the Roman Empire.

The city ruins will give you a clear idea about how the Ancient Romans lived, thanks to Neptune Baths and its famous mosaics, the Theater, which still hosts plays today , the Forum, which was the centre of city life, the House of Diana’s ruins and the ancient “Thermopolium”, where they used to sell hot beverages.

Along the main street, you can see the ruins of ancient storefronts, the only two surviving examples of public toilets in the world, and extraordinary examples of Ancient Roman apartment blocks, named “insulae”, which date back to the 4th Century B.C.

This accessible tour will end with a visit to the medieval town and see its castle, through narrow and picturesque alleyways, where time seems to stand still.