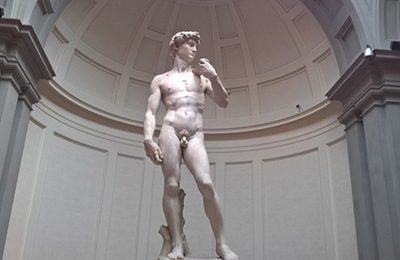 Half Day
The Academy of Florence is closed on: Monday and National Holidays.
Florence.

The Gallery owes its popularity to the presence of several sculptures by Michelangelo: the Prisoners, the St. Matthew and, especially, the famous David, brought here in 1873.

The adjacent rooms derive from two ancient monasteries. Important works of art were collected from the Academy of Design, the Academy of Fine Arts and suppressed convents, from the 19th Century on. They are mostly religious paintings, made by great masters operating in Florence and its surroundings, from the second half of the 13th Century, until the late 16th Century. The collection of tables with gold background is particularly unique.

The rooms on the first floor host a magnificent collection of late Gothic polyptichs, which are still intact.

The gipsothèque by two sculptors, operating in the 19th Century, is particularly noteworthy: Lorenzo Bartolini and Luigi Pampaloni, and the collection of Russian Icons.

Recently the Gallery has been enriched with the Department of Musical Instruments, which includes ancient, important instruments from the “Luigi Cherubini” Conservatory, from the Medici and Lorraine collections.

This accessible tour moves on to the Florence Cathedral and the famous bell tower, designed by Giotto, realized using white, pink and green marbles, with bas-reliefs by Pisano and della Robbia.

The Baptistery was originally a pagan temple, with gilded bronze doors of which the Gates of Paradise are part of. Reaching Ponte Vecchio, full of goldsmith and jewelry shops, you’ll discover the history of Palazzo Vecchio, the seat of political power, and Piazza Signoria, in the heart of Florence, built on top of the ruins of 13th Century houses.