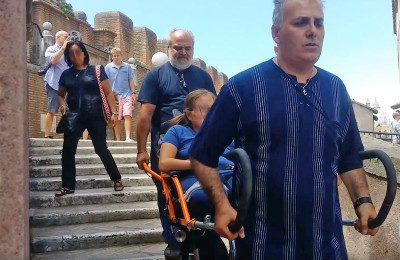 Half Day
Please note for this tour the wheelchair user have to rent our special wheelchair for inaccessible sites Wheely trekky. The site is not accessible with manual or electric wheelchair or mobility scooter.
Rome.

The building originally was a mausoleum for one century. It was commissioned by the Roman Emperor Hadrian for himself and his family. After a while, the castle has been turned into a military outpost and, during Emperor Aurelian times, became a fortress.

The castle changed his name to “Castellum Sancti Angeli”, after the medieval legend. According to it, the Archangel Michael appeared to Pope Gregorio Magno, announcing the end of the plague. After that, the castle gradually passed into the control of the Papacy.

At the beginning of mid-5th century, they built the papal apartments inside the castle and it became the seat of State files.

In 1527, during the Sack of Rome, its rooms hosted the pontifical court of pope Clemente VII, who was escaping from the Vatican buildings through secret passages, called “passetto del borgo”.

Sant’ Angelo Castle became property of the Italian Government in 1870, as military barracks and jails, until 1901. Mariano Borgatti, major of the Italian army, promoted huge restoration works for this building. In 1911 it was the location of the international Exposition in Rome and, in 1925, the National Museum of  Castel Sant’Angelo was founded, thanks to the donations received from the International exposition.

Thanks to our Special wheelchair “the Wheely Trekky”, now you can visit the site of Castel Sant’Angelo, unaccessible area for wheelchair users.