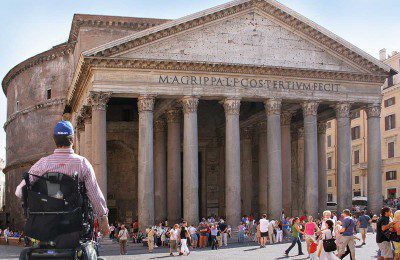 This accessible tour has been designed to cover some of the most interesting sites of Rome, such as the Trevi Fountain, the well-known baroque fountain designed in 1762 by Nicola Salvi, which became famous thanks to Federico Fellini’s movie “La Dolce Vita“.

This monument is also known for the legend of the three coins: throw three coins and make three wishes… It is believed that this act will ensure your return to the Eternal City.

Moreover, you will visit Piazza Navona. It originally was a Roman stadium and it is still oval race-track shaped nowadays. This piazza has become the day and night life centre of Rome. It was embellished in Renaissance times, with spectacular fountains and churches, followed by later additions of art galleries, outdoor restaurants and cafés.

Then you will reach the Pantheon, one of the greatest and best-preserved monuments of ancient Rome. Built by Agrippa in 27 B. C, the monument is a great example of architecture. Originally a Pagan Temple, it was turned into a Church in 609 by Pope Bonifacio IV.

Our tour for wheelchair users continues to Piazza Colonna, where you will admire the marble column, built by the Roman Senate in memory of the Emperor Marco Aurelio.

Then you will arrive to the Spanish Steps, the hour glass-shaped square that is one of the most popular spots in the city. Built in 1726 by Francesco De Sanctis. From the top of the stairs you will admire an unforgettable view of the Eternal City.

At the end of the tour you will have free time for shopping in the famous streets surrounding Piazza di Spagna.