New discoveries about a human remain from the eruption of Vesuvius Volcano in the 79 a.C. in Ercolano, Italy. 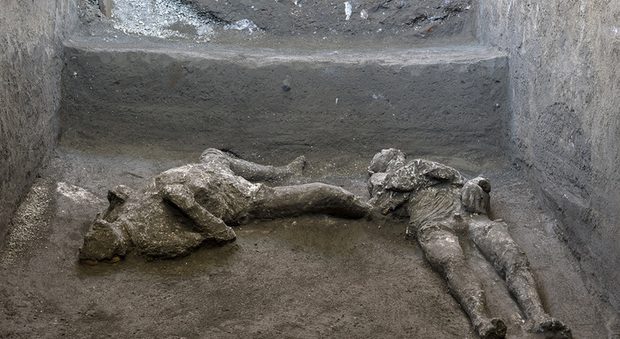 Along the Gulf of Naples, new discoveries have been made regarding the human remains of the 300 fugitives during the eruption of Vesuvius Volcano in the 79 a.C. found in the first ’80 in the archaeological park of Ercolano, Italy. Francesco Sirano, the director of the park, signed a research and gave identity to one of them who was formerly classified as a simple soldier.

Following the studies of a detailed armor and a small bag containing carpentry tools found on him, the director explains that he could have been an officer of the rescuing fleet sent by the army commander “Pliny the Elder” to help and save the inhabitants who were trying to run from the eruption. However, the lava constantly flowed down from the Vesuvio Vulcan and reached houses, the people, and the unfortunate officer. He was found with his arms bent forward as he was trying to find a hold and with his face beneath the sand.

In addition, the alleged Pliny the Elder’s officer was found wearing a leather belt embellished with gold and silver plates with an engraved sword with an ivory hilt attached. Opposite to the sword, the man carried a precious dagger and 12 silver dinars and 2 made of gold which made experts learn more about his social status, since it was circa the amount of money a praetorian could earn in a month.

Thanks to bone tests it was easy to define that the man was between 40-45 years old and in a good state of health, so the researchers are even more convinced that he worked for the army.

Sirano assumes that he was either the admiral of Pliny the Elder’s fleet or a high official of the navy. On the other hand, he said it is also possible that the man was a “faber navalis” in Roman military ships who is an engineer specialized in carpentry works if considering working tools found in his bag and the fact that the body was found near a military ship.