Visit with our special wheelchair the accessible ruins of Villa of the Quintilii in Rome, known as the villa of the “Gladiator Emperor”. 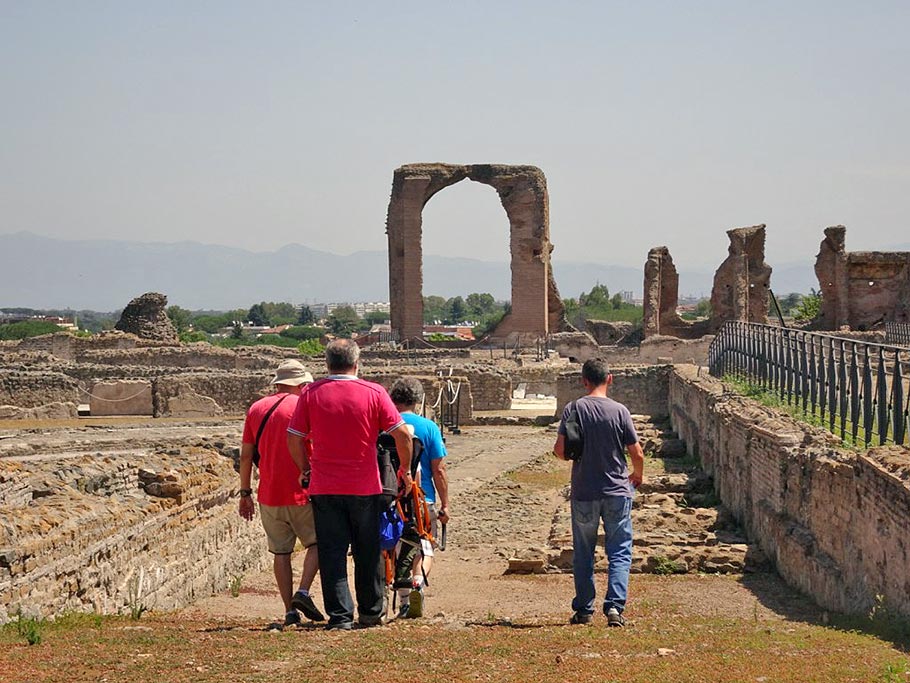 A beautiful archaeological site and museum on the “Appian Way”.

The Villa of the Quintilii accessible tour with the special wheelchair will take you to see a beautiful ancient roman villa on the “Appian Way”. The “Appian Way” was one of the most important roads in the Roman Empire, and it connected Rome to the south of Italy. In the “Villa of the Quintilii” you will see the many beautiful rooms and decorations built by the Roman Emperors that lived here. The pavements of the villa are decorated with marble slabs of different colors arranged in geometrical patterns, which have been preserved throughout the years. The Villa of the Quintilii accessible tour with the special wheelchair will show you all the rooms of this ancient building: there are huge private “thermae”, hot baths where ancient Romans could take baths and spa treatments, a “nymphaeum”, a building dedicated to the mythical “nymphs”, a “theater”, and even a “horse racetrack”. Finally, in a small museum you will be able to see many other pieces of art that were recovered here, including a huge marble statue depicting “Jupiter”, also called “Zeus”, the king of the pagan Roman gods. The “Villa of the Quintilii” is located in the beautiful countryside near Rome, and its gentle slopes offer a relaxing atmosphere that is perfect to explore this important Roman archaeological site. The “Villa of the Quintilii” also has quite a dark history, made of political intrigue and assassinations!

The most famous occupant of the villa was “Emperor Commodus”, who lived in the second century AD at the end of the “Pax Romana”, the golden age of the Roman Empire. “Commodus” had quite a bad reputation during his reign. After he died, the “Roman Senate” even declared him a public enemy and tried to destroy all the statues that depicted him. “Commodus” had a habit of fighting against gladiators and wild animals in the “Colosseum”, which many people considered inappropriate for an Emperor. He was very proud of his strength, and considered himself to be like “Hercules”, the powerful hero of legend. He even commissioned some statues depicting him as “Hercules”, with the skin of a lion draped across his back and a wooden club in his hand. When two roman consuls, the brothers “Sextus Quintilius Condiano” and “Sextus Quintilius Valerius Maximus”, were accused of conspiring against him, he had them sentenced to death and seized their property, which included the villa. He was eventually assassinated himself in the year 192 AD.

The Villa of the Quintilii accessible tour with the special wheelchair will let you visit this beautiful archaeological site, where you will see perfectly preserved decorations dating to the time of the Roman Empire. Visit the accessible house of one of Rome’s most extravagant and controversial Emperors.

The special wheelchair is highly recommended for outdoor activities or the following private tours in Italy provided by romeanditaly group, where path for disabled wheelchair users it’s not provided by the site itself, or doesn’t cover the entire surface. https://www.romeanditaly.com/accessible/special-wheelchair/

Videos of our accessible tours with the special wheelchair here https://www.romeanditaly.com/accessible/our-video/

Royal Palace of Caserta accessible tour: inside the largest “Italian” royal palace in the world.